Aleesah Darlison writes picture books and novels for children and reviews books for The Sun Herald. Aleesah has always loved unicorns and as a child she collected unicorn figurines. Writing The Unicorn Riders series has been a dream of Aleesah's for a long time and she is excited for modern readers to fall in love with unicorns too. When Aleesah isn't chasing her writing rainbow, she's usually looking after her three very energetic children and her two dogs, Buck and Floyd.

Some interesting facts about Aleesah:

1. Aleesah grew up in the country.
2. Aleesah once had a pet eel and a pet snake.
3. Aleesah is allergic to bees – and blows up like a balloon when stung.
4. Aleesah used to collect all sorts of unicorn figurines when she was little.
5. Aleesah was reading and writing from the age of four – and hasn't stopped.
6. Aleesah loves all animals, especially Australian animals.
7. Aleesah won lots of colouring-in competitions as a child, including a huge box of chocolates once.
8. Aleesah's favourite colour is red. Her favourite foods are chocolate and sushi.
9. Aleesah won a writing competition when she was sixteen, which won her school 3 computers ($10,000 worth). 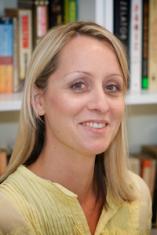